Nest has a new product to announce on June 17th

Nest hasn’t announced anything new since it was acquired by Google last year. That’s all about to change as the company is sending out invites for an event, which will take place on June 17th.

The invite itself is short on details. Rather than teasing or dropping hints, it simply asks publications to join for “a Nest press conference.” That hasn’t stopped speculation from occurring, of course.

The Nest Thermostat hasn’t received any substantial hardware or software changes in quite a while, so that could be one possibility.

Google and Nest picked up Dropcam last year, which means we could see some sort of home security product.

Google recently announced an operating system for the Internet of Things, Project Brillo, which Nest helped create. We could hear more about Nest’s product’s integration with this OS.

There have also been rumblings that Nest is planning to move into audio.

We shall soon find out what Nest has planned. Its press event takes place on June 17th at 10am PT. 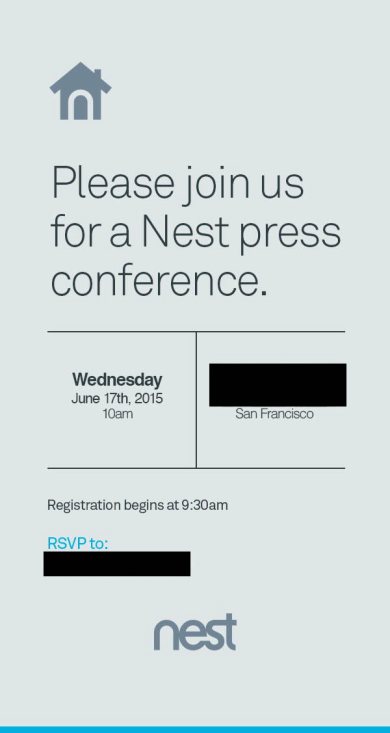 In Short: Nest is sending out invites for a press event that will take place on June 17th. There’s no hints as to what it will showcase on the day.